So: George Phillies, come on doooooowwwwn! You're the next contestant on "Your Position Is Not What You Just Said It Was!"

From Wednesday's Kubby/Phillies debate on The Liberated Space:

"First, I've never proposed tariffs on China. That was an invention of GE Smith."

Then, from George's campaign web site -- curiously, this position paper is no longer linked to his "issues" page, but was still on the server as of noon CST 12/07/07:

When a country is a dictatorship that suppresses labor unions and shoots labor organizers, the goods it exports are stolen property, stolen from the workers coerced to make them. Stolen goods cannot be traded freely. We should not engage in 'free trade' in stolen property. Furthermore, it is only fair that all manufacturers pay the same taxes. We may differ as to what those taxes should be. However, there should not be one tax rate for Ford Motors, and another much higher tax rate for General Motors. When we place a financial burden however labeled on American manufacturers, fairness dictates that foreign imports be subject to the same burden, a tax equivalent to whatever minimum wage and environmental restrictions foreign manufacturers are avoiding.

Tariff \Tar"iff\, n. [F. tarif; cf. Sp. & Pg. tarifa, It. tariffa; all fr. Ar. ta'r[imac]f information, explanation, definition, from 'arafa, to know, to inform, explain.] 1.A schedule, system, or scheme of duties imposed by the government of a country upon goods imported or exported; as, a revenue tariff; a protective tariff; Clay's compromise tariff. (U. S. 1833) [1913 Webster]

Has George Phillies uttered the sentence "I propose tariffs on China?" I have no idea.

Has George Phillies proposed tariffs on China, whether he said those actual words or not? Yes, he has -- unless perhaps he's alleging that GE Smith hacked the Phillies 2008 web server, created a fake Phillies position paper out of whole cloth, and then somehow made it impossible to delete that paper while otherwise leaving the server accessible to George's campaign staff for other updates.

Congratulations, George! You're a winner on "Your Position Is Not What You Just Said It Was!" We hope you'll enjoy your prize, a printable/frameable portrait of US Representative W.C. Hawley (R-OR) and US Senator Reed Smoot (R-UT) shaking hands after plunging America into the Great Depression with their take on your idea. 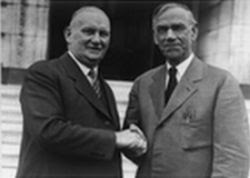 Welcome back! It's time for the Grand Prize Round on "Your Position Is Not What You Just Said It Was!" Fresh off his first-round victory, contestant George Phillies says:

Second, my immigration position is the position of our Libertarian Party in its platform.

It's going to be a close one, folks. Let's check our contestant's web site:

Immigration - I support the Libertarian Party Platform. You cannot have open borders and a large-scale welfare system at the same time. You will go broke. As has happened before in our history, if you have open borders poor country governments will pay people to move here, promising them a better life in the New World. Each time we add a worker to the Social Security system, we enormously increase our (unfunded) national debt, because Social Security is run on pay-as-you-go. Under the present welfare system, a vote for open borders is a vote for higher taxes for all. Someday, the Libertarian message of peace, liberty, and prosperity reach the entire world. All people will then enjoy the freedom and high standard of living we take for granted. In that day, immigration and open borders will be non-issues.

Borders - Americans who quote the Statue of Liberty's message 'Your huddled masses yearning to breathe free' should remember that it was written when most of Europe was run by autocratic monarchies. The huddled masses of Europe now breathe free. George Bush has created many enemies for America. Keeping them from coming here to injure our children and grandchildren must remain a top priority for the foreseeable future.

Foreign Workers - All too often, we hear claims that we must import foreign workers because Americans won't do those jobs. 'Those jobs' in question are hard, physically demanding, outdoor work that require constant, careful attention to detail. Those jobs should be receiving a wage premium, not be barely-minimum-wage sources of employment. There are jobs that Americans won't do, notably in the sciences and engineering; we allow foreigners to come here to study, but then require them to leave. Mr. Bush's foreign guest worker scheme is a corporate welfare deal at the expense of the American worker.

Now, let's go to the platform of the Libertarian Party:

The United States government should return to the historic libertarian tradition of avoiding entangling alliances, abstaining totally from foreign quarrels and imperialist adventures, and recognizing the right to unrestricted trade, travel, and immigration. [emphasis mine] [Source: Front matter of Plank IV, "Foreign Policy"]

It's looking good for George, ladies and gentlemen. Can he get over the top? Let's see:

He's going for it, folks! He's going all the way!

Transitional Action: Ensure immigration requirements include only appropriate documentation, screening for criminal background and threats to public health and national security. Simplifying the immigration process and redeployment of surveillance technology to focus on the borders will encourage the use of regular and monitored entry points, thus preventing trespass and saving lives. End federal requirements that benefits and services be provided to those in the country illegally. Repeal all measures that punish employers for hiring undocumented workers. Repeal all immigration quotas. [Source: Op.Cit.]

Woooo! Vanna, raid the prize closet! We've got a Champeeen! Everyone say it with me, now: George, "Your Position Is Not What You Just Said It Was!" Let's give it up for George, first-round winner and now Grand Prize titleholder! What do we have for our contestant, Vanna? A vowel? No, no ... we don't want him to buy anything, we want to give him something. Wow. I'm whelmed, Vanna. You really know how to pick'em. George, you've won ... a book recommendation! Check out this classic political manual to help you further your poltical aspiratons along their current lines!

Thanks for playing, George, and everyone tune in next week for another exciting game of "Your Position Is Not What You Just Said It Was!" -- if we can find a guest. We were planning to have Lou Dobbs on, but we think maybe we just did.
Posted by Thomas L. Knapp at 12:45 PM